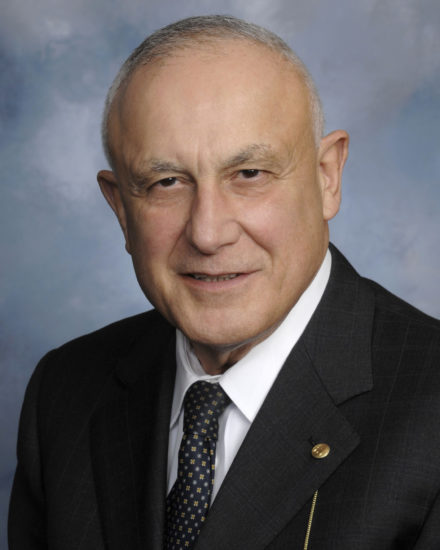 Mr. Mattioni attended the United States Merchant Marine Academy where he graduated with honors. He is a licensed Master Mariner and was a member of the United States Naval Reserve. After graduating the USMMA, he attended Georgetown Law School, joined Mattioni, Ltd., and became a partner along with his brothers, Dante, Blasco, Faustino and John. The firm engages in many legal disciplines including substantial work in admiralty and maritime matters.

As a licensed Master Mariner of steam and motor vessels, any gross tons, oceans, Mr. Mattioni has practical experience in ship handling, cargo operations, and vessel management. Mr. Mattioni has more than 40 years of experience in providing legal counseling and litigation services to self-insured and commercially insured business clients in various industries, as well as to third-party claims administrators. He has litigated numerous claims for occupational injury and disease, toxic poisoning, product liability, and medical malpractice.

In recent years Mr. Mattioni has represented small and large businesses and individuals in many employment related claims, including discrimination claims based on race, national origin, gender, and age, as well as claims for sexual harassment, wrongful termination, and violations of the Wage Payment and Collection Law. He successfully represented a regional health insurer in an ERISA/gender discrimination case which was tried in the Eastern District of Pennsylvania. He has served as counsel to a municipality and handled all of its employment related claims, including those under the Family Medical Leave Act, and those for discrimination, harassment, wrongful termination, and related issues. Mr. Mattioni also provides counseling to individuals and companies with regard to employee terminations and severance.

Mr. Mattioni has practical experience with various forms of alternative dispute resolution, and he has served as a mediator and arbitrator. He has written and lectured in the fields of workers’ compensation, with emphasis on the Longshore and Harbor Workers’ Compensation Act, and employment related claims.

Mr. Mattioni has been active in various legal and community associations. He is currently the Chairman of the Maritime Academy Charter School. Mr. Mattioni is a founding member along with his brother Dante, class of 1953 of the Maritime Academy Charter School. Starting with 300 Cadets in 2003 and they now have 820 Cadet students from the 2nd grade to the 12th grade. The school is now sending its Cadets upon graduation to the Seafarers Union School at Piney Point, State University of New York and employment with maritime companies operating on the Delaware River. As Chairman of the Board, Mr. Mattioni spends many hours in advancing the interest of its Cadet students, teachers and administrative staff. MACS is the only school in the City of Philadelphia with a U.S. Naval Sea Cadet program and Honor Guard. The Cadets frequently attend U.S. Coast Guard Boot Camp at Station Cape May. The 3rd and 4th grade Sea Shanty Chorus are in demand at maritime programs throughout the maritime community in the Delaware River and Bay. The Cadets attend many maritime programs including the sailing vessel Niagara, Seaport Museum, Wooden Boat Building, Sailing Club, State University of New York and Massachusetts Maritime Stem Program among other maritime related venues. The Cadets regularly appear in National Sea Perch Robotic Competition. The school has an award winning art program and music program. Virtually all of the graduates attend a college of their choice, including by way of example, Pennsylvania State University, Drexel University, Holy Family University, Chestnut Hill University, Community College of Philadelphia, Temple University, and many others.

Mr. Mattioni serves on the Board of the Maritime Exchange for the Bay and Delaware River. In 2016 Mr. Mattioni was appointed by Mayor Michael A. Nutter to be a member of the Navigation Commission for the Delaware River and its Tributaries. The Commission has the power to grant licenses to pilots and regulate the services they provide among other duties and responsibilities. Mr. Mattioni was honored by being named 2014 Person of Year in recognition of his service to the Philadelphia Maritime Community by the Ports of Philadelphia Maritime Society. Mr. Mattioni was recognized by his classmates and was awarded the 2017 Meritorious Alumni Service Award of the U.S. Merchant Marine Academy.